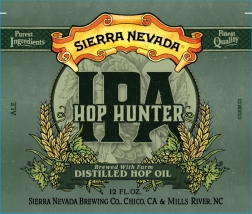 I took a break from mentally traveling back through yesteryear for Part 2 of my 2014 retrospective when I came across some rather intriguing news about Sierra Nevada and a certain hop hunting IPA. While most have focused on the now defunct lawsuit from Lagunitas over font and typography, there is an intriguing beer buried in the controversy. Now, SN is known for playing around with hops. They were the first to use wet hops long ago and you need look no further than the recently released Harvest Wild Hop IPA with Neomexicallious, a hop found growing in the wilds of New Mexico. For these hop dynamos, the announcement of a new IPA should come as no surprise, but the process in making this beer does.